After that large lunch at Arpège, I was trepidatious about Alléno. Are we even going to be able to finish the meal? Are we going to relax and enjoy the meal?

The Pavillon Ledoyen itself has quite the storied history, having been host to Napoleon, Degas, Monet, and others. The building is quite beautiful, although we arrived after sunset when the grounds were a little less exciting. Its close proximity, though, to the Avenue des Champs-Élysées is lovely. There’s something about seeing the Arc de Triomphe off in the distance while crossing the street. My rural scene here in Ottawa has a distinct lack of 200 year old landmarks.

We started the meal with some Moët & Chandon from 2000 and a quartet of “salinités”. A floral amuse bouche; a cep tartlet; a tapioca with tomato pesto and black olive mousse; and a veggie tart of Jerusalem artichoke and beet.

Heading into the larger courses, we started off with a watermelon ham that made us question whether we heard the waiter correctly. Was it watermelon? Was it ham? It was delicious. And it turns out that it’s watermelon that has been smoked to the consistency of meat. This was served with a thin zucchini slices, zucchini flowers, and pistachios from Bronte, Iran, and Turkey. So tasty.

Next up was a plate of M. Morisseau’s mussels in a celery oil and sea salt butter. It was served alongside cucumber and a bowl of lobster topped with savoury mussel ice cream.

Following that was a tasty langoustine quenelle topped with lovage, coral, and buckwheat seeds alongside a langoustine perfumed with curry and Iranian lemon. I enjoyed this dish very much.

Just before the main course was a chicken-flavoured custard topped with foie gras. I enjoyed the foie gras, as I almost always do, but the custard threw me off a bit. It had an oily taste that, I think, needed something to balance it.

The main course was a mille-feuille layering of Wagyu beef and Paris mushrooms. Suffice it to say, it was definitely a highlight of the meal.

If you’re ambitious, you can also opt for a blue lobster dish. It’s the entire body of the lobster served with a side of fritters. It’s a lot of food; I’m glad I stuck with just the Wagyu.

To transition into dessert, we had a Fontainebleau cheese with voider jelly and fermented fir buds.

The dessert was a slow-cooked fig in a frozen yellow curry; a soufflé with caramelized creme flavoured with cocoa; a mushroom marshmallow seasoned with chocolate and sea salt, apricot, and a light meringue flavoured with hazelnut and mushroom ice cream.

I chose the full wine pairing with this evening’s meal and was delighted by the pairings. Nothing jumped out but nothing was horrible, either.

The dessert wines, however, were a treat. The first was an Alsace Grand Cru Gewurtztraminer from 2007. It had a lighter sweetness that went well with the desserts. The second was a Madiera Frasqueira Sercial from 1992, which had a stronger sweetness that works better on its own.

The food was delicious and the service was wonderful. It ended up being our favourite of the four restaurants we made it to in Paris on this trip. 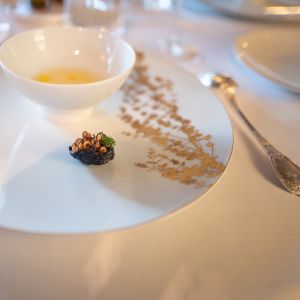 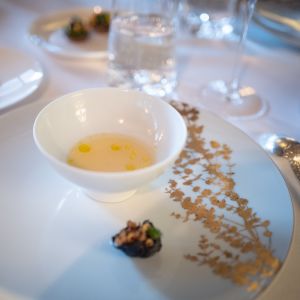 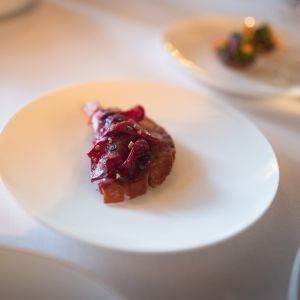 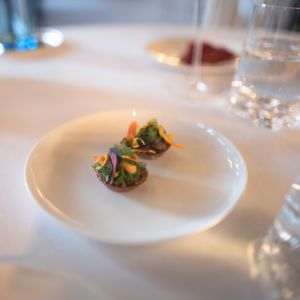 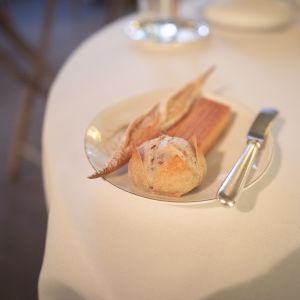 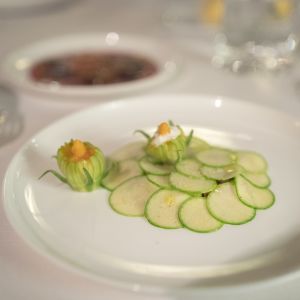 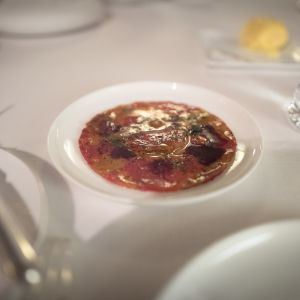 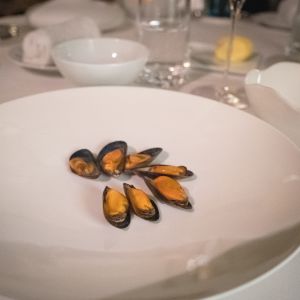 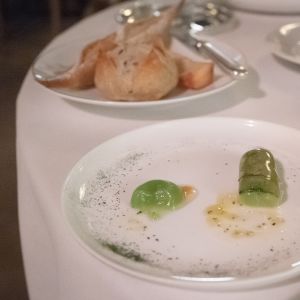 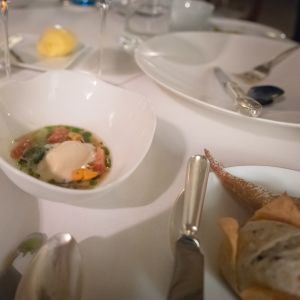 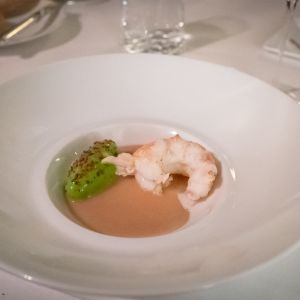 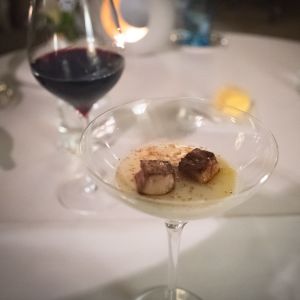 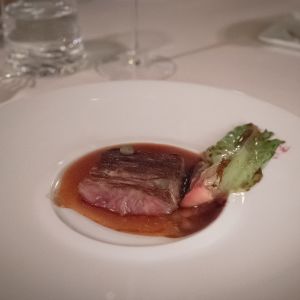 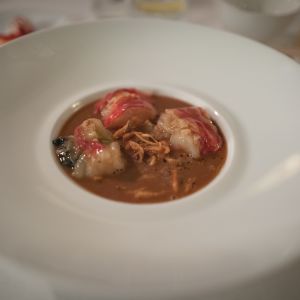 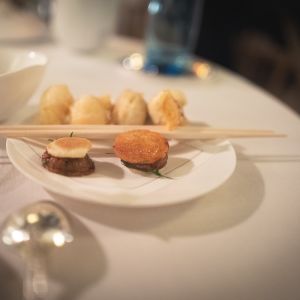 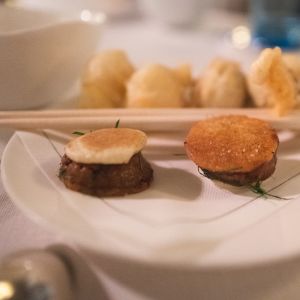 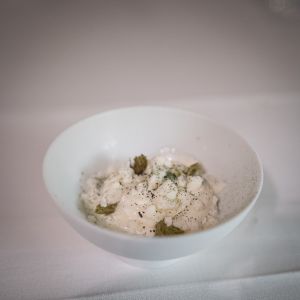 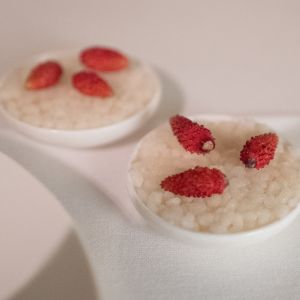 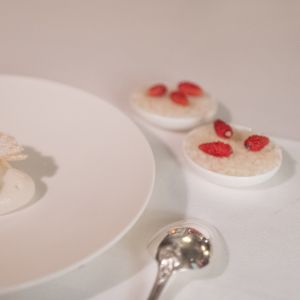 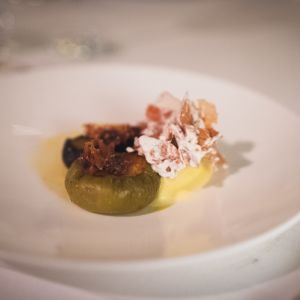 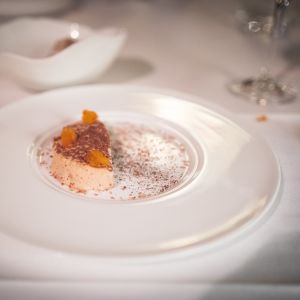 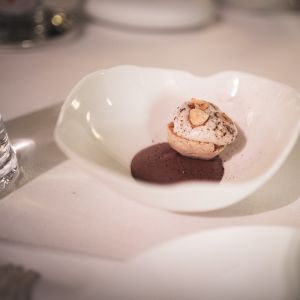 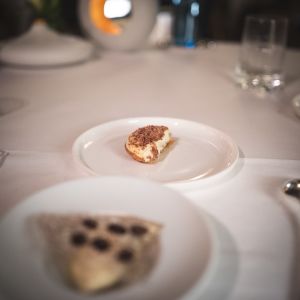 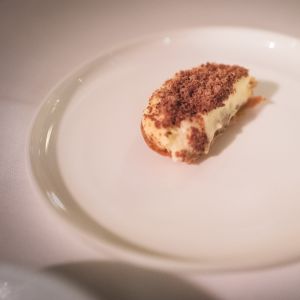 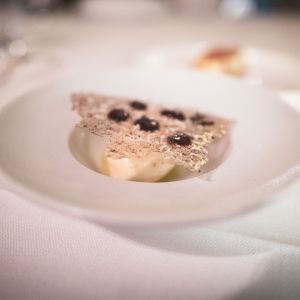 Before this was Arpège
After this was Astrance
* * *